When Robert got over his funk at being left on shore on the first day we packed a lunch and bathing gear to explore the area. Damiana said that the name of the dominant peak was Teta de Vaca, Cow Tit Peak. It looked doable. We’d done a lot of mountain climbing at home, but part way up the loose rock, prickly brush and increasing heat dampened our enthusiasm for bagging another peak, so we turned toward one of the several bays we could see from the side of the hill.

On a secluded beach of blazing white sand we shed our clothes. Needing a good wash, we discovered our path the to deep water was blocked thousands of saucer-sized sand dollars dug into the soft sand, so thick they had to rest on each other. After carefully threading our way past them, we swam and floated in the calm bay. The peace was disrupted by an old B-52 that flew low over our heads and we were alert for a patrol vessel since we thought we might be in the Catch 22 restricted area.

Ready to head back, we followed the shoreline past cows and date palms, scanned the beach for unusual shells and rocks and poked around in the tide pools. When a deep inlet blocked our way, we climbed to the top of a cliff to get our bearings and eat our lunch. The surrounding waters were placid and deserted.

Then we struck out to go over the ridge and around the peninsula to our camp. Our estimate of our location was wrong and we discovered that there were several ridges and three peninsulas plus stickery brush, loose rock and steep slopes between our tent and us. Instead of a nice hike, it turned into a survival march. We were stumbling and slipping dangerously in the scree until we finally reached the road, thirsty and tired.  Approaching us from the camp were Lingo and Jorge, back from fishing. Jorge carried a small rifle. They were off to find some meat for dinner, a rabbit or possibly a deer, they said, but they had no luck that day. 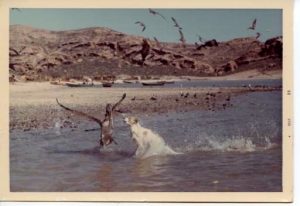 Other days we spent time with Philipe, the youngest grandchild, who was ten or twelve, adventurous, always active. When not chasing birds, Philipe carefully cleaned shark jaws and sold them to a Californian who came around once a year to buy whatever they had. Toward the end of our visit, I was touched when he presented me with one of the small jaws. He also gave me a necklace made of the grey inch-long olive shells that were abundant in the bay. He had scraped the tips on a rock until the shell was worn away leaving a hole at each end for stringing. In the middle of the necklace he had strung two shark spines. I tucked those treasures into my pack to send to my parents for safekeeping the next time we found a post office.

I often just sat on the beach and watched the birds. Brown pelicans glided between the waves so near the water it seemed they must get their belly feathers and wing tips wet, but they never did, even on the windiest days. Clouds of terns sailed in the distance when there were no fish guts for them on shore. Occasionally, the anachronistic bombers from the movie set thundered down the bay and back into the hills.

Go to the next chapter: Camp Life